Grant recipients would need to match at least 25% of the awarded amount with nonfederal funds. The matching requirement would not apply in exceptional circumstances, such as a grantee serving a high proportion of individuals with barriers to employment. Grants could be extended for an additional two years.
The measure would direct grant recipients to allocate at least 5% of funds for financial aid to apprentices through emergency grants.  Grantees would be required to complete an annual independent evaluation of how funds were used, and the number of program participants served.

The legislation would authorize $75 million in fiscal 2021, increasing by $10 million annually to $115 million in fiscal 2025, for state apprenticeship agencies (SAA) to support programs under the national apprenticeship system.  Each state would receive funding based in part on a formula using several factors, including the number of individuals participating in an apprenticeship program, living below the poverty line, and who are unemployed.  Agencies would have to match at least 25% of their allocation with nonfederal funds. The legislation would direct agencies to also use:

Also, the measure would require all programs under the national apprenticeship system to:

The legislation would authorize $10 million in fiscal 2021, increasing by $2 million annually to $18 million in fiscal 2025, for the Labor and Education departments to enter into an interagency agreement. The agreement would support the integration of registered apprenticeships with secondary, postsecondary, and adult education programs. The Labor Department would conduct, through an independent entity, research for improving the effectiveness of registered apprenticeship programs. The research would have to address the extent to which the programs respond to the needs of the local labor market and align with high-skill, high-wage, or in-demand industries or occupations.

Finally, the Labor Department expressed concerns with the legislation and said the measure "includes an excessive number of requirements that are overly prescriptive, unworkable, and may have unintended consequences." The department also wrote that the measure would repeal the authority used to create IRAP, and remove the legal basis for the agency's operation of that program. 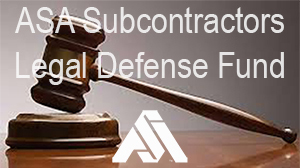 ASA underwrites the legal costs of filing "friend-of-the-court" briefs to inform the Court regarding the broader impact of relevant cases throughout the country. We have won dozens of these cases since 1997, vindicating subcontractor rights today and into the future! Each year, courts across the country hand down hundreds of decisions on federal and state laws, as well as court-made or "case"law, that apply to subcontractors' businesses. Many of the decisions impacting subcontractors interpret the contract provisions of subcontract agreements—provisions like pay-if-paid, hold harmless, duty-to-defend, and no-damages-for-delay. Some of these decisions are precedent-setting and carry significance for subcontractors across state lines. ASA's Subcontractors Legal Defense Fund supports ASA's critical legal activities in precedent-setting cases to protect the interests of all subcontractors. ASA taps the SLDF to fund amicus curiae, or  friend-of-the-court," briefs in appellate-level cases that would have a significant impact on subcontractor rights.

Exchange ideas and knowledge with your peers and other industry leaders.

Access to General Contractors, Owners, as well as other industry influencers.

ASA of Mississippi offer subcontractor-tailored events and education including Members-only educational resources ranging from model contract language to risk management and marketing tools. We also offer in-person and distance-learning educational events open to members and nonmembers for a fee.

An entire library of learning tools and services.

Reasons to Join ASA of Mississippi

The Mississippi ASA Board of Directors on or before December 31st of each year accepts nominations from its membership for General Contractors, Architects & Engineers who should be considered as ASA “Partnership Member Firms”. This is an elite group of construction professionals that are NOT subcontractors or supplies and they are not eligible to become ASA Member Firms. This program was established so that the chapter could recognizes those firms that exemplify strong professional working relationships with ASA of Mississippi’s member firms. All “Partnership Member Firms” are discussed and voted on by the chapters Board of Directors.

ASA is proud to announce its 2020 Partnership Program Nominees:

If you’re not a member, please join ASA so you will be able to receive all of this important information.